The guests got a surprise when they saw 15 % discount on the bill. They uploaded the receipt on their page of Facebook out of curiosity and lo; the receipt went viral. This incident took place with the visiting staff of a radio station from Florida. 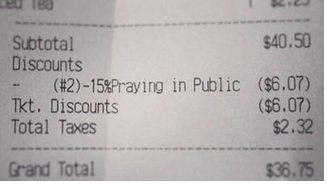 All this happened at the ‘Mary’s Gourmet Dinner’ restaurant of the Winston-Salem City of North Carolina. When thy received the receipt, it had a tag of ” Prayer in Public” discount of 15% The Owner of the Restaurant Mary Haglund said that the cut meant that they were grateful to the inspiring guests.
It was not necessary that the guests be Christian only; they could be from any religion. As long as they pray prior to commencing of eating, the rules apply, and the discount given.

After the receipt had gone viral on Facebook, some people did not agree with the idea of the restaurant. They opposed and raised the question against the reasons given. They said that it would be unethical not to give a discount to the Atheists who did not pray. They demanded to stop the cut. The Restaurant said that they were not discriminating against anyone but were grateful to the customers. They have been doing well without any advertising for years.

When some people, (a group called the Freedom from Faith Foundation), talked of taking the matter to the Court, the restaurant stopped giving the discount. No controversy was the line followed by the Owner.

Some lawyers had called up to defend the restaurant but for the time being no such plans. The Owners are likely to revive the discount at a later date.