Scientists at the University of London observed that children who saw TV or Internet three or more hours a day were three months leading of their companions who saw less than an hour a day.  They were disclaiming received wisdom that blames TV for decreasing youngsters’ brain power. (under news in The Telegraph,  28th Nov 2016)

Parents have for years allotted the amount of television their children can watch in the hope that too much will jumble their offspring’s brains. Now a study implies the reverse is true – that children who get stuck to the screen for hours a day can on more than average, exceed classmates who watch considerably limited. It also noticed that other family rules forced by parents hoping to promote their children’s academic skill or expertise, such as insisting on fixed bed or meal times, gain only a relatively small variation.

While TV has always been blamed for diminishing children’s brain power, educationals found those who saw three or more hours daily were three months leading of those who watched less than an hour a day.

“This critical study suggests the link between TV and video games and health is complicated and determined by many other human and environmental circumstances.”

The North American Pediatrics of the USA and Canada have given ten reasons for banning the use of handheld devices for the children under the age of 12 years. The age groups, divided into some hours,  recommended using these gadgets. In the age group 0-2 No access, 3-5 one hour, 6-18 just 2 hours in each 24 hours. In actual practice, it got noticed that children were using 4-5 times than the recommended times. The researched-based findings for the ban:

1. Hurried brain growth (maturity): The children between age – to 2 experience fast brain maturity and gain the size three times its original. This early brain maturity relates( Christakis 2011) itself to the exposure to the environment stimuli or not. In their experiments, they were able to describe the stimulation.  Because of overexposure to handheld gadgets of modern technologies( cell phone, iPads, the internet or TV) skills at the later stage in life and noted that such overexposure resulted in lower ability for self-regulation, inability to pay attention or concentrate, acquiring discernment, apprehension, learning, understanding, comprehension, reasoning, thinking,

2. Retarded Growth: The overuse of the technology gadgets results in slowed down growth. One-third of the children are below the normal way to respond and achieve results in their academic achievements. Use of handheld technology is harmful to child development and learning( Rowan 2010)

3.Undesirable Obesity: Children who use much of technology gadgets in their bedrooms, get obese because of less physical activities that result in later life diabetes and early heart diseases that would lead to a lesser life span than their parents ( Professor Andrew Prentice, BBC News 2002)

4. Sleep Denial or Deprivation: Approximately 60 % of Parents do not regulate the use of handheld technology by kids. About 75% are provided technology utilized in the bedroom because of that they do not sleep sufficiently. The low grades of 75% of kids are the result of lack of sleep for children between 9-10 of age.

5.Intellectual or Irrational Sickness: The overuse of technology is believed to cause children to have sadness or sorrow or remain in low spirits for an extended period. They can exhibit psychosis and problematic behavior ( Bristol University, Mentzoni 2011Liberator 2011.) In Canada about 16% of children had mental sickness, remain on psychotropic medication. (waddle 2007)

6. Hostile or violent behavior: Over the years, it has been proved that children exposed to media violence, explicit sex, murder, rape learn to behave arrogantly and negatively. These kids are to subjected to correction by using seclusion rooms( Huesmann2007). Some TV program disturbs the children such as the (Latest installment GTA V is thought to be one of the best-selling video entertainments of all time, having sold more than 32 million copies worldwide).

8. Dependency on some habit to go on: The repeated observation that as parents who detach themselves from children find the children get attached to technology that can finally result in children getting addicted to devices or handheld technology.

9. Electromagnetic waves emission: The EMF radiation from mobile phones of category 2B ( possible carcinogen) is not safe for children growing up and affect their immunity system developing as compared to adults. The WHO has asked the various governments to change over to category 2A (Probable Carcinogen).

10. Healthy ecosystems and surroundings are necessary to the survival of Children which is not possible today with technology in use today. Hereunder a photo explains limitations for handheld gadgets. 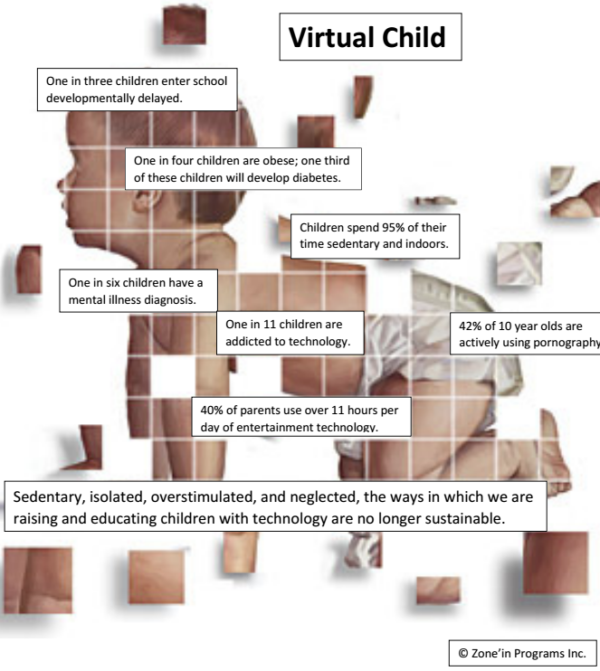 The picture and figures depict the quantity of water that gets absorbed due to wireless radiation that damages the brain. Unborn babies and the young have more water in their system. More water means more radiation absorption than grown-ups. The ratio is one to ten of radio waves emissions absorption. The living cells of youngsters get easily influenced by the radiation. It is better to live in the radiation-free atmosphere and switch over to wired technology. The wired technology is ten times faster and also have 15 times the bandwidth and reliable. The wired technology ‘s hard to hack and costs far less and saves energy and healthier.

The World Health Organization has listed wifi and all radiofrequency radiation as a Class 2B carcinogen based on an enhanced risk for glioma, a malignant type of brain cancer, associated with wireless phone use, among other health related issues. WiFi is in the same category as lead, chloroform, and car exhaust.Via. See for more exhaustive  info:www.zonein.ca