Yogesh Chukewad with his team invented the first flying drone (robot) in the USA. He is a PhD researcher at the University of Washington. He made the successful flying drone (robot) in his research project and claimed that this is the first robot of the world. He graduated BTech with Hons from Indian Institute of Technology Mumbai, India and went on to this project after his MS in the USA.  He is a PhD scholar in Mechanical Engineering at the University of Washington where he works in the Autonomous Insect Robotics (AIR) Laboratory advised by Prof. Sawyer Fuller. His analysis focuses on designing and fabricating insect-scale robots. He also works on controlling the flight of these insect-scale robots with the help of onboard as well as off-board sensors. Before coming to UW, he did his MS in Mechanical Engineering at Arizona State University. On the industry front, he worked as an engineer on the Core Engine Simulation team at Caterpillar Inc., Peoria, Illinois from 2014 to 2016.

The drone is of the size of an ant and performs many tasks. He explains that his drone’s size is equal to an ant can do big and small jobs perfectly such as to crops’ survey, detecting gas leakages at homes. The flying robot has slightly bigger the size of a toothpaste tube. Its cost is just a few hundred dollars. The drone has circuit attached that energises it to fly.

More about World’s first wireless fly-sized robot. The team developed the world’s first fly-sized robot that does not require a wire to the ground to provide power and control signals. It is a challenge because of the complexity of miniaturising the circuitry to operate the robot’s piezo actuators. The piezo actuators, which drive its flapping arms, need a step-up voltage converter. The team concluded out a new way to promptly make the ultra-light circuit and consolidated the first microprocessor brain on-board, producing a circuit mass is less than a toothpick. We gave power using an infrared laser beam. RoboFly, evolved by researchers from University of Washington (UW) in the US is insignificantly heavier than a toothpick and gets power by a laser beam. It uses a small onboard circuit that transforms the laser energy into adequate electricity to move its wings.

“Before now, the theory of wireless insect-sized flying robots was science fantasy. Our new wireless RoboFly confirms they’re much closer to actual life,” said Sawyer Fuller, an assistant professor in the UW. Wing flapping is a power-consuming method, and both the power origin and the controller that manages the wings are too large and heavy to ride onboard a tiny robot. Fuller’s previous robo-insect, RoboBee, had a cord – it received power and control by cables from the ground. But, a flying robot should be prepared to work on its own. Scientists decided to use a thin laser beam to power their robot. They guided the laser beam at a photovoltaic cell, which is fastened above RoboFly and transforms the laser light into electricity. “It was the most effective way to quickly transfer a lot of power to RoboFly without attaching much weight,” said Shyam Gollakota, an associate professor at UW. However, the laser alone does not give enough voltage to move the wings.

That is why the team devised a circuit that increased the seven volts emitting from of the photovoltaic container up to the 240 volts required for flight. To give RoboFly power over its wings, researchers attached a microcontroller to the very circuit. “The microcontroller acts like a real fly’s brain indicating wing muscles when to fire,” said Vikram Iyer, a doctoral student in the UW. Specifically, the controller sends voltage in waves to mimic the fluttering of a real insect’s wings. “To make the wings flap forward speedily, it sends a series of pulses in rapid succession and then decreases the pulsing down as you get near the top of the wave. And then it does this in opposite to make the wings flap evenly in the other direction,” said Johannes James, a doctoral student at UW. 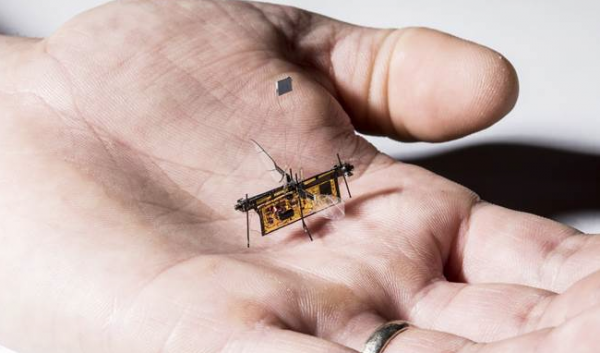 For now, RoboFly can barely take off and arrive. Whenever its photovoltaic cell is out of the straight line of sight of the laser, the robot runs out of power and comes down. However, the team hopes to be soon able to steer the laser so that RoboFly can flutter and fly around. While a laser beam presently energises RoboFly, future versions could use tiny batteries or harvest energy from radio frequency signals, Gollakota said. Future RoboFlies can be of more advanced brains and sensor arrangements that help the robots navigate and complete tasks on their own.