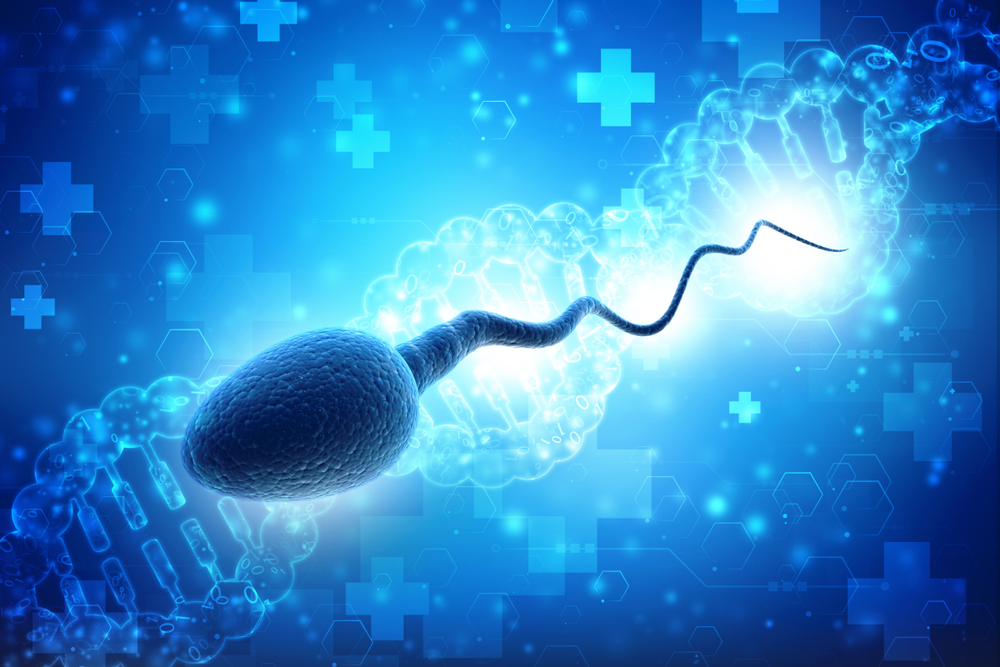 Male infertility is described as the inability of a man to impregnate a fertile woman. It affects about seven percent of men in the world. The condition is commonly caused by deficiencies in the semen of a man such as low sperm count and several other factors. The quality of semen is used as an alternative measure of male fertility.

The organ responsible for sperm production is the testes (testicles). The testes are oval-shaped and are contained in the scrotum. Most men have two testicles. They are also responsible for making the primary male sex hormone called testosterone. Read more about that here.

Infertility in men is caused by various factors including anti-sperm anti-bodies, Klinefeltersyndrome, age, trauma, mumps, malaria and others. One common cause of male infertility is sperm DNA fragmentation. It is a condition of the sperm that has to do with abnormal genetic material. The term will be explained further in subsequent paragraphs in this article.

What is Sperm DNA?

Sperm DNA is anchored to a single structure called the nuclear annulus. The nuclear annulus is crucial to the organization of sperm DNA. This process begins from the anterior tip of the sperm head and proceeds towards the tail.

The sperm chromatin is tightly packed due to disulfide cross linkages between the protamines. The protamines let the nuclear head become compact and prevent DNA stress and breakage.

The fact is that about fifty percent of all male infertility cases are caused by sperm DNA fragmentation. Human fertilization involves the meeting of the sperm and oocyte, joining of the cell membranes and coming together of the male and female gametes genomes.

It is a fact that a small percentage of sperm from fertile males also consist of traceable levels of DNA fragmentation. The condition can be corrected by oocyte cytoplasm. However, there is evidence to prove that the sperm of sterile men are affected by high levels of DNA fragmentation. This condition may negatively affect the process of reproduction.

There is a standard test for sperm DNA fragmentation to determine a man’s fertility. This test involves semen analysis for sperm form and structure as well as sperm motility (or mobility). However, the test does not give adequate information about the genetic makeup of sperm cells like the PhadkeLabs.com – sperm DNA fragmentation test which is important for embryo development.

A great level of DNA damage in sperm cells may denote a reason for infertility that routine tests cannot uncover. Fragmentation of sperm DNA is considerably more in infertile males, while males with poor semen parameters are more likely to be affected by high sperm DNA fragmentation. This condition may also be discovered in men that have healthy semen parameters, but whose sterility is unexplainable.

Normal embryo development can be affected by sperm whose DNA is greatly fragmented. The embryos will have a poor prognosis. This is more likely to start from the second day of embryo development after the paternal genome is activated. It affects future blastocyst development.

Studies have shown that embryonic DNA damage can cause gene mutations and cell degeneration. This can result in restricted embryo development and miscarriages. If those two do not the happen, the child may have birth defects or may be prone to childhood cancers.

If the man has a high percentage of sperm cells with damaged DNA, the chances that such pregnancy will be successful will be slim. Conventional DNA fragmentation tests do not have the ability to accurately predict the chance of pregnancy even after assisted conception treatment.

Read more about that here: https://www.theadventurouswriter.com/blogbaby/8-types-of-infertility-treatments-and-assisted-conception/

High sperm DNA fragmentation is partly responsible for the decline in natural pregnancy rates. It has also contributed to higher miscarriage rates from both natural conceptions and assisted conception treatment.

There is need to test for DNA fragmentation in sperm cells in order to identify the causes of unexplained infertility, unsuccessful IVF treatment cycles or incessant miscarriages.

What Are the Causes of Sperm DNA Fragmentation?

Sperm DNA damage can be caused by various factors making the origin of this condition multifactorial. The factors include conditions such as:

The Need for a DNA Fragmentation Test

A DNA Fragmentation test offersa reliable analysis of sperm DNA makeup that will aid doctors in diagnosing men who are prone to initiating a failed reproductive process. Information about sperm DNA makeup will aid in proper clinical diagnosis and treatment of male sterility. It may also be of prognostic value in evaluating the results of assisted conception treatment.

If clinicians can identify high levels of DNA fragmentation in sperm cells, it will help them to determine the possibility ofsperm donation. The test can also help married couples in decision making about their planned course of action for reproductive treatment.

Awareness of this condition will help couples to adopt the right lifestyle modifications and fertility modality that can boost their chances of a successful pregnancy.

Book an appointment with an accredited and trusted laboratory so as to get the test done. Some laboratories allow bookings to be done online for the sake of ease. They also allow reports to be downloaded from their websites. Be rest assured that these websites are secure.