For  entire human race, there are 28 elements  used in the construction of human beings. All persons irrespective of color and creed and caste have brain which is about 2% the body weight is about 1.8 kgs for male and 1.6 weight for female. It is formed of more than 100 billions Neurons. Neurons are formed to generate , receive and transmit

vibrations different frequencies. There are about 52 different parts in human brain. All these parts, through neurons control , coordinate and carry out almost  all activities of a human being.  Using kirlian photography, it is established that there are seven major energy centers in human body. It is found that color of these energy centre is given by seven colors of rainbow designated VIBGOUR  in short. It is also found that constitution of these energy centers is either uniform and unbroken or shattered and non-uniform depending on the daily routine of any human beings. Yoga plays very important part in unification of these energy centers. It is experimentally found that preforming pranayam and chanting certain mantras unify the broken shadows of energy centers. If the energy centers are uniform and unbroken, the health and other activities of human beings are in perfect condition. All parts of the human brain works to optimum level. Some disease are entirely eradicated while others are minimized. This can be proved by taking 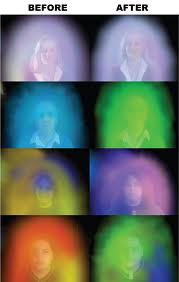 before and after doing the yogic exercises. Thus using scientific instruments it can be experimentally proved that yogic exercises, pranayama and chanting of mantras benefit all the human beings. It is therefore recommended that Yoga is required for the entire human race consisting of all religions, colors & creed.