Prosthetic, when applied to physicality, means the process of restoring the lost part of the body by artificial means. Prosthetic benefits the living in their movements of daily life.The advancement in this science has added new fields  as Robotic prostheses, Limb Prostheses, Lower and upper extremity prosthetics,  Craniofacial prostheses many other types. Here, below we have concentrated prosthetic for animals.

1) A dog unable since birth could walk:

Hopa is four year old dog. It had only two legs from the birth. On 28th Feb 2010, he could walk with the help of prosthetic in TelAvi. The students of Animal Living art made this prosthetic attachment as shown.

2) Prosthetic gave legs to the Cat:

Oscar, the first cat to have received two hind legs through prosthetic that could walk. It lost its leg in an accident with a harvester. A special implant called ITAP was given to Oscar. The skin can grow on the implant. Humans can live a useful life by using prosthetics science. 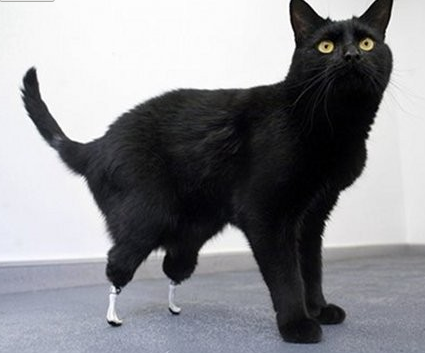 Okinawa( Japan) : A dolphin Fuji’s fin held by a keeper in the picture. Fuji lost 75% of its fin due to illness. Bridgestone tyre company donated a prosthetic fin to enable it swim again. 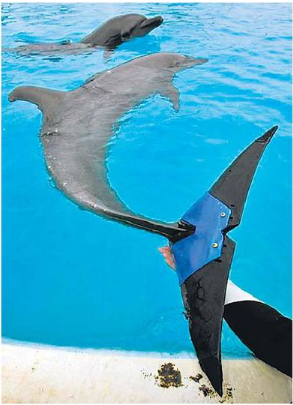 4) Wheels helped a Tortoise to to walk that had lost legs:

This tortoise in Israel had damaged its spine. It lost use of its hind legs because of an accident with a lawn mower. Two wheels enabled Jevika to walk as earlier.

The elephant could not support weight on its leg because of the damage ten years ago. This female elephant called Motella lost of its left front foot due to a land mine explosion on the Thai – Myanmar border. Prosthetic leg could make her mobile. 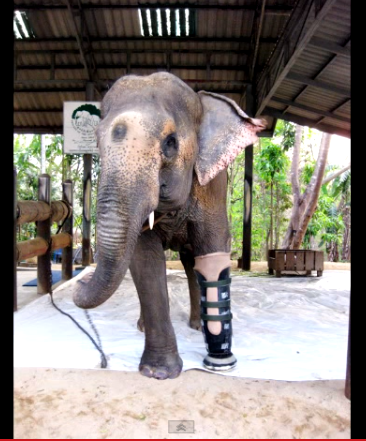