The entry is through a cave, known as the Robber’s cave. The main features of this impressive and huge structure: There are three burial chambers.The lowermost chamber is that of the head queen, over this is the chamber of other queens and uppermost is the chamber of the fourth dynasty Egyptian Pharaoh Khufu (The King).

It is said that granite slabs used in King’s chamber were stolen later.

The salient features of the pyramids are:

– It is the oldest of the seven wonders of the world, still in fairly good shape.
– Of three pyramids the largest is the Great Pyramid.
– 2.3 million limestone blocks are used in building. Each block weighs between 2.5 to 15 tons.
– This is the only pyramid where ascending & descending passages were built and very well designed.
– The entrance door weighs 29 tons and can easily be opened from inside but cannot be pushed or slide from outside.
– The other pyramids nearby are those of Khufu’s father and the grandfather.
– the mortar used in construction is of good quality which can not even be imitated today.
– World’s best firms have agreed that such a building cannot be built even today.
– The experts the world over mostly accept that pyramids were made using large blocks of huge limestones from quarries.The stones were dragged and lifted in position.
Please watch the U Tube video below. It has something more to tell about the mystery of how the way pyramid may have been built. 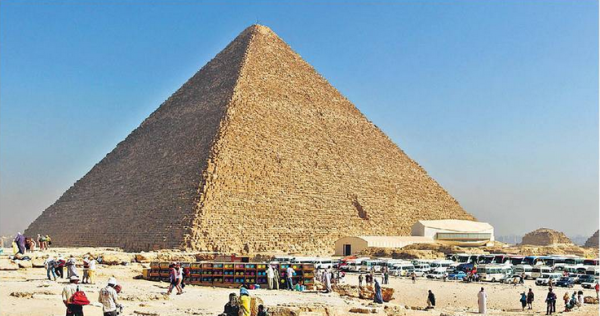