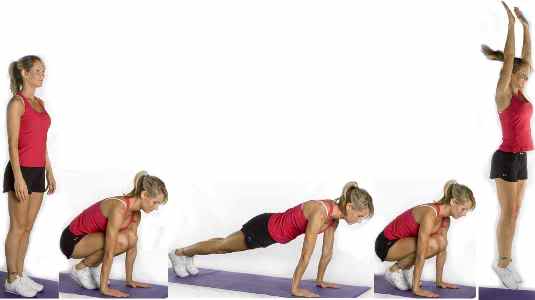 Today everyone is in the race of losing weight for that we buy many products. A quick browse of the internet will lead you to many sites offering miracle solutions to fat loss and fitness.

Each month we can browse the magazine rack at our local bookstore and find a dozen or more fitness magazines all claiming to contain the secret to strength and six-pack abs. It is unfortunate that many self-appointed fitness gurus deceive the public with expensive, ineffective gadgets and gimmicks.

If you find yourself lost and confused with your strength and conditioning work, I have one exercise that will crank up the intensity, and won’t cost you a dollar. A few minutes of Burpee conditioning will quickly convince you that your own natural body weight provides plenty of resistance for an ass-kicking workout that blasts your stamina and fats loss through the roof.

A combination of squat, push-up, and vertical jump, the Burpee has a bad reputation for being the exercise of choice in prisons. But it is one of the best exercises we have.

Burpee was named after Royal H. Burpee, American psychologist. According to the Oxford Dictionary, the term originated in the 1930s. The original usage was Burpee test, in which a series of burpees are executed in rapid succession, designed to measure agility and coordination. But there’s a bit more to the story than that.

Burpee (1898-1987) was a physical education advocate who worked for the Greater New York YMCA for more than 50 years. It was in that context that he developed his test, which was used by the Navy and Army, according to a New York Times article from 1959.

How to perform Burpee?

There are several variations that will crank up the intensity. Some of the more effective variations include:

A good weighted vest is more than a pair of dumbbells. You can perform traditional Burpees, while wearing the vest. I highly recommend the weighted vest if you really want a challenge.

I guarantee that a regular dose of Burpee conditioning will provide immediate, and drastic improvements in your physical fitness. Burpee intervals are one of the best conditioning drills for athletes. You can trust it.

PrevPreviousStretching and Exercises to keep you Fit and Active
NextMorning Walk: Perfect Exercise to Stay FitNext
On Key