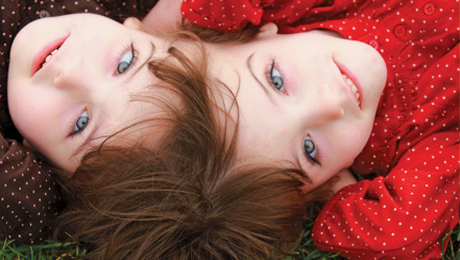 Birth defects are structural or functional abnormalities present at birth that cause physical or mental disability. Some may be fatal. Researchers have identified thousands of different birth defects. Currently, birth defects are the leading cause of death for infants during the first year of life.

Birth defects have a variety of causes, such as: Genetic problems caused when one or more genes doesn’t work properly or part of a gene is missing Problems with chromosomes, such as having an extra chromosome or missing part of a chromosome Environmental factors that a woman is exposed to during pregnancy, such as rubella or German measles while pregnant, or using drugs or alcohol during pregnancy. Here are some strange birth defects. Have a look.

We sometimes say that two people are so close that they appear ‘joined at the hip’ –metaphorically speaking, of course. But imagine this were reality. Siamese twins are formed from a single egg which develops into two almost separate balls of cells. In normal twinning, each ball becomes an identical twin. As a result cells in Siamese twins become confused about where they are in the body – indeed which of the two Siamese twins they are actually in.

Siamese twins are identical twins whose bodies are joined in utero. A rare phenomenon, the occurrence is estimated to range from 1 in 50,000 births to 1 in 100,000 births, with a somewhat higher incidence in Southwest Asia and Africa.

Approximately half are stillborn, and a smaller fraction of pairs born alive have abnormalities incompatible with life. The overall survival rate for conjoined twins is approximately 25%. The condition is more frequently found among females, with a ratio of 3:1. The end results can be very bizarre:  a single organism with two heads, two hearts, four legs and arms.

The excess growth of hair occurs in areas of the skin with the exception of androgen-dependent hair of the pubic area, face, and auxiliary regions. The whole body of patients with Ambras syndrome is covered with silky, lightly colour  hair that can reach several centimetres in length and is most prominent on the face, ears and shoulders.

Facial dimorphisms, tooth abnormalities, hex dactyl and accessory nipples have been reported in single cases. Unlike other forms of hypertrichosis, none of the patients with Ambras syndrome had metabolic or endocrine defects.

Sirenomelia, alternatively known as Mermaid Syndrome, is a very rare congenital deformity in which the legs are fused together, giving them the appearance of a mermaid’s tail. This condition is found in approximately one out of every 100,000 live births (about as rare as conjoined twins) and is usually fatal within a day or two of birth because of complications associated with abnormal kidney and urinary bladder development and function.

More than half the cases of sirenomelia result in stillbirth and this condition is 100 times more likely to occur in identical twins than in single births or fraternal twins. It results from a failure of normal vascular supply from the lower aorta in utero. Maternal diabetes has been associated with caudal regression syndrome and sirenomelia, although a few sources question this association.

Cyclopia is a rare form of holoprosencephaly  and is a congenital disorder (birth defect) characterized by the failure of the embryonic prosencephalon  to properly divide the orbits of the eye into two cavities. Its incidence is 1 in 16,000 in born animals, and 1 in 250 in embryos, one in 2,500 that end in miscarriage. Typically, the face is either missing or replaced with a non-functioning nose in the form of a proboscis. Such a proboscis generally appears above the central eye, or on the back, and is characteristic of a form of cyclopia called rhinencephaly orrhinocephaly.

Most such embryos are either naturally aborted or are stillborn upon delivery/ hatching. A congenital abnormality in which there is only one eye. That eye is centrally placed in the area normally occupied by the root of the nose. There is a missing nose or a nose in the form of a proboscis (a tubular appendage) located above the eye.

Craniopagus parasiticus is a medical condition in which a parasitic twin head with an undeveloped (or underdeveloped) body is attached to the head of a developed twin.  A very rare type of conjoined twins connected at the top of the head, where the second twin does not fully develop, but rather forms a parasitic twin.

Fetus in fetu is a developmental abnormality in which a mass of tissue resembling a fetus forms inside the body. There are two theories of origin concerning “fetus in fetu”. One theory is that the mass begins as a normal fetus but becomes enveloped inside its twin.

The other theory is that the mass is a highly developed teratoma. “Fetus in fetu” is estimated to occur in 1 in 500,000 live births. A fetus in fetu can be considered alive, but only in the sense that its component tissues have not yet died or been eliminated. Thus, the life of a fetus in fetu is akin to that of a tumor in that its cells remain viable by way of normal metabolic activity.

Fibrodysplasia ossificans progressiva (FOP), sometimes referred to as Stone Man Syndrome, is an extremely rare disease of the connective tissue. A mutation of the body’s repair mechanism causes fibrous tissue (including muscle, tendon, and ligament) to be ossified when damaged.

In many cases, injuries can cause joints to become permanently frozen in place. Surgical removal of the extra bone growths has been shown to cause the body to “repair” the affected area with more bone. FOP is a genetic disease. The bone growth progresses from the top downward, just as bones grow in fetuses. A child with FOP will typically develop bones starting at the neck, then on the shoulders, arms, chest area and finally on the feet.

Progeria  is an extremely rare genetic condition wherein symptoms resembling aspects of aging are manifested at an early age. The word progeria comes from the Greek words “pro”, meaning “before”, and “géras”, meaning “old age”. The disorder has very low incidences and occurs in an estimated 1 per 8 million live births.

Those born with progeria typically live to their mid teens and early twenties. It is a genetic condition that occurs as a new mutation , and is rarely inherited. Although the term progeria applies strictly speaking to all diseases characterized by premature aging symptoms, and is often used as such, it is often applied specifically in reference to Hutchinson-Gilford Progeria Syndrome.

In the context of human evolution, human vestigiality involves those characters (such as organs or behaviors) occurring in the human species that are considered vestigial—in other words having lost all or most of their original function through evolution. Although structures usually called “vestigial” often appear functionless, a vestigial structure may retain lesser functions or develop minor new ones.

In some cases, structures once identified as vestigal simply had an unrecognized function.Vestigial characteristics occur throughout nature, one example being the vestigial hind limbs of whales and snakes. Many human characteristics are also vestigial in other primates and related animals. The following characteristics have been or still are considered vestigial in humans.

Anencephaly is a cephalic disorder that results from a neural tube defect that occurs when the cephalic (head) end of the neural tube fails to close, usually between the 23rd and 26th day of pregnancy, resulting in the absence of a major portion of the brain, skull, and scalp.

Strictly speaking, the translation of the Greek term to English is “no brain” (that is, totally lacking), but it is accepted that children with this disorder are born without a forebrain , the largest part of the brain consisting mainly of the cerebral hemispheres, including the neocortex, which is responsible for higher-level cognition, i.e. thinking.

The remaining brain tissue is often exposed — not covered by bone or skin. Most babies with this genetic disorder do not survive birth, however there have been notable exceptions.