On the first day of his state visit to Britain, President Obama had a busy schedule. It was nice and pleasant surprise to note that they agreed to play ping pong in the late afternoon. He and the British Prime Minister David Cameron as partners had played ping pong with the students of Globe Academy, London in May 2011. 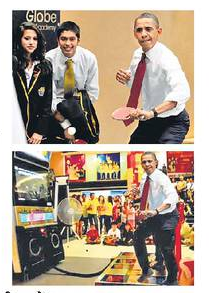 Their photographs were used by different people and photoshopped in various poses with new and imaginative themes on a war footing. Photo shop extensively used for both personalities showed in all sorts of mixtures and imaginable photos. Some had showed them playing guitar or on the dance floor. In less than 12 hours mare than, 124000 likes recorded.

The press and media had much to gossip about this event with juicy comments. It seemed, as if this photo opportunity was pre – planned. Right after the President had paid a visit to the Queen, reaffirming their old ties between the USA and the Great Britain. The meeting between the Heads of governments was next on the agenda. Politically, they mused about their unique relationship and updating their latest position. The press plus the media could gauge their involvements the world over. This time, here they were up to something delightful: to play the indoor ping pong game with youngsters. They lost in the ping pong game against Jason Do and Jamiyu Mojaj, both 16. Ping pong diplomacy had its own way expressing old wine in a new bottle. All in all, it was an entertaining way to leave memories forever.