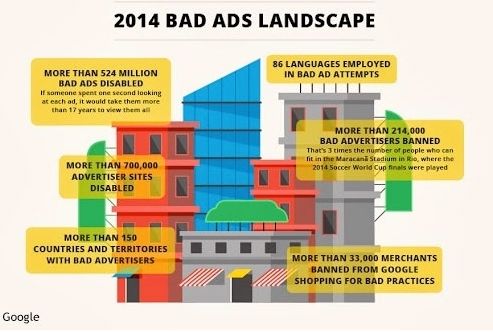 Google is primarily an internet user company that has made surfing simple and straight forward, as its principle for the customers. It has set an exemplary trend for the other internet firms.

The company has deactivated more than 524 million bad advertisements from its web world.

More than 150 countries and territories had bad advertisers.

Besides this, the company has blocked in 2014, more than 214000 bad advertisers that were giving ads that were diverting the attention of the users. The internet users were unable to pay attention to their work. Such ads were mostly of the nature of altering the personal weights or hair problems, or about selling medicines and such useless matters. Other ads got removed that on clicking them virus would affect the computer system.

For this decision, media Sights gave encouraging comments to Google. Most of them said that Google is an internet user-friendly company. They added that Google is always ready and bound to provide better services to the internet users. Other company should learn from the above facts from Google.

Google, later on said that it wants to remove completely those ‘Bad Actors from the Web Ad World, who misled the internet users. Google got founded on the ecosystem of maintaining the security of its Internet users. Some of the Companies will be affected by the change, but the Company will continually keep working for the benefit of the users.

The company has disclosed the details in a post giving all particulars and emphasizing that any evil intention and unlawful conduct, fraud or swindling get attended on the immediate basis.

We need to consider how safe it is on the internet for the regular visitors. Online security is continually in a state of hanging as the hackers would never like to hold back to steal and make trouble for internet world. Add to this countries sponsoring the hackers.

The traditional and comfortable way for the hackers and phishing experts is to go for stealing credit card and bank details by getting to know the password and related data. In a way, they would use and extract info from computers woking independent of controls.

They would target particular users and not use prevalent method of ‘hit and hope’. More of spam emails are likely to come as the used technology would get more advanced.

Cyber criminals are efficient enough to circumvent the modern email systems and give tough time to cyber security companies. We expect the mail in spam folder to increase as bulk of security measure will prove ineffective contend these cyber security firms.

The hackers and cyber criminals are likely to attack and pursue the institutional user of the internet. The areas include health, insurance, both in public and private sectors, Banking Companies, and the data holders Firms having definite purpose to follow.

The banking and health insurance sectors are at a greater risk. The banking is still not reforming its old style of chip and pin and switch over to two-factor authentication.

Healthcare companies have much of personal data that may get targeted by very active criminal cyber operators. The healthcare sector is at a greater risk than credit card system. The personal identity may be used to commit many types of financial cheating by the hackers.

Those removed were a small fraction of the total ads volume handled by Google. The remaining ad companies strictly follow the laid down policies and practices of the enterprise and protect internet users.

Google’s trend to remove bad advertisers is sure to benefit all for maintaining the high standard of its dealing for all, the internet users, advertisers the world over and the trade, in particular.

This picture belongs to Ladakh, part of Kashmir in the Himalayas. You can see soldiers of Indian Tibetan Border Police (ITBP). They are naked till 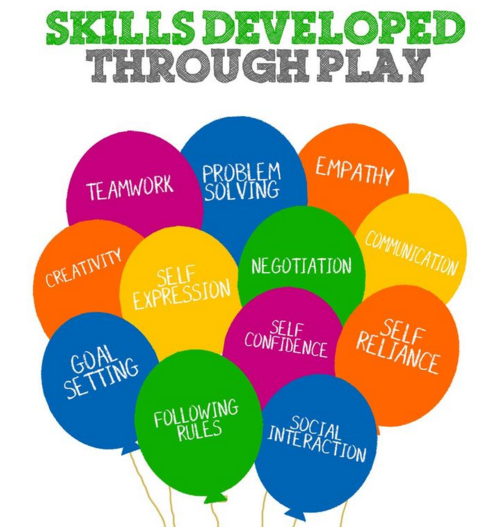 Experience the pleasure of humor builds a sense of friendship and relationship among two people—qualities that establish firm, happy association. When you smile with one